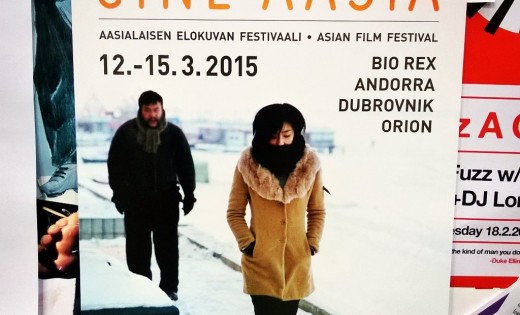 Finland’s first and only festival of Asian films begins on Thursday 12 March and continues until Sunday 15 March. The festival brings a plethora of films from East and Southeast Asia to central Helsinki. On the bill there is something for everyone – acclaimed drama, female energy, international guests. Tickets to many of the festival screenings are still available – get yours now to avoid disappointment! Tickets to the screenings that are not sold out in advance can also be purchased from the screening locations.

Shinya Tsukamoto’s latest film Fires on the Plain (2014), which was shown at the Venice Film Festival, has also received international praise. In reworking the 1950s anti-war classic by the same name, cult director Tsukamato has added his own touch to it. Many of the friends of Helsinki Cine Aasia will already be familiar with Tsukamoto’s style from his cyber punk classic Tetsuo: The Iron Man (1989).

Helsinki Cine Aasia provides also plenty of international female energy this year. Natsuka Kusano, the director of Antonym (2014), will be visiting the festival. She will attend the screenings of her film to talk about the making of it and to answer questions from the audience. Antonym, which she has also written and produced, is Kusano’s debut film.

Kusano is just one of the representatives of the new generation of Asian female directors whose work will be shown at Helsinki Cine Aasia this year. Others include Nguyen Hoang Diep whose film Flapping in the Middle of Nowhere (Vietnam/France/Germany/Norway, 2014) will be shown at the festival on Saturday 14 March, Kulikar Sotho (The Last Reel, Cambodia, 2014), Kim Dong-myun (The Liar , South Korea, 2014) and Siege Ledesma (SHIFT, The Philippines, 2013).

See you at the movies!