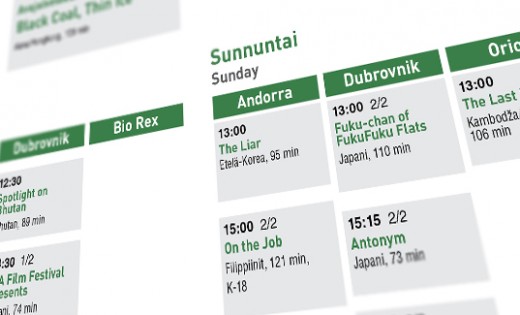 Our 2015 programme explores the history of Asian cinema. Garuda Power – The Spirit Within (2014) casts the light on the history of Indonesian action films and Spotlight on Bhutan introduces its viewers to the short history of Bhutanese Cinema. Uzumasa Limelight (2014) portrays an old samurai movie extra and Chigasaki Story (2014) is a nod a towards the great Japanese auteur Yasujiro Ozu. The Last Reel (2014) explores the history of Cambodia and its cinema by the way of drama. In addition to the opening film Black Coal, Thin Ice (2014) China is represented in the programme by Zhang Yimou’s Coming Home (2014) which is a touching story set in the aftermath of the Cultural Revolution. From Vietnam there are two impressive films, 2030 (2014) and Flapping in the Middle of Nowhere (2014).Helsinki Cine Aasia has of course not forgotten the friends of genre-films this year either. On the bill we have On the Job (2013), a full-on action film from the Philippines, comedy from Japan, Fuku-chan of FukuFuku Flats (2014), and Antonym (2014), the debut from a Japanese female director Natsuka Kusano  – and many more!Download the catalogue from here. Details of all of the films are also available here, and the schedule here. Tickets go on sale 5 March.